I met my friend Angela my freshman year of college when we bonded over cat cadavers in Anatomy and Physiology lab. I was drawn to her delightfully odd sense of humor and ability to take jokes a bit too far in the best possible way. I was a heavy metal chick at the time, with not much in the way of personal style beyond concert t-shirts and ripped jeans. But Angela introduced me to alternative music, quirky clothes, and cool and funky footwear, from John Fluevog shoes to Doc Martens boots. For the awkward, brooding, somewhat reserved nerd that I was, Angela stood out in vivid, glittery contrast to the black and white backdrop of a campus full of strangers I couldn’t quite connect with.

Growing up, I never had a huge group of friends. I was not popular, nor was I unpopular. I flew under the radar – elusive, like Bigfoot or Waldo, a fuzzy blur in the snapshot of youth, waving and smiling unremarkably in a sea of faces. I sometimes tried too hard to fit in and be popular, but I learned with time and experience to value quality over quantity. And those few close friends from childhood, high school, college, and beyond, they were awesome, and still are.

Angela still makes me laugh 25 years later. She recently shared a picture on Facebook of a “Pinterest Fail” – a birthday cake supposedly decorated in the style of Van Gogh’s Starry Night that she had attempted to recreate from a photo downloaded from Pinterest. “I was really trying on that cake, until I wasn’t,” she wrote. “Then it was just laughter and frosting!”

I hope someday I can look back at my adult angst over my numbers of followers, likes, and shares, my worries about perfection, and my fears of rejection, with the wisdom of a Starry Night cake that wasn’t, and say the same:

“I was really trying, until I wasn’t. Then it was just laughter and frosting.”

Image by rawpixel from Pixabay 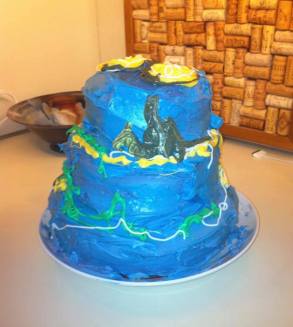 5 thoughts on “Friends – Laughter and Frosting”

This site uses Akismet to reduce spam. Learn how your comment data is processed.

Jen Rosado originally hails from a parallel universe in which she was first a medical laboratory technologist, then an elementary school teacher. She spent her free time swing dancing, reading, watching sci-fi shows, and carefully planning ahead in a desperate attempt to avoid anxiety-provoking situations. Due to a twist of fate (or perhaps a Cosmic Conspiracy), Jen now resides in this universe with her husband and son and spends her days in anxiety-provoking situations. Although not qualified to discuss the theoretical quantum physics of parallel realities, she has plenty of personal experience in the realms of autism and anxiety. If she has a spare moment, you'll find her procrastinating, overanalyzing, or pondering deeply the meaning of life. This blog is a collection of stories, musings, and observations about life, parenting, anxiety, autism, and whatever else the future may hold in this strange, unsettling, and enlightening universe. This is NOT a blog about Quantum Physics.